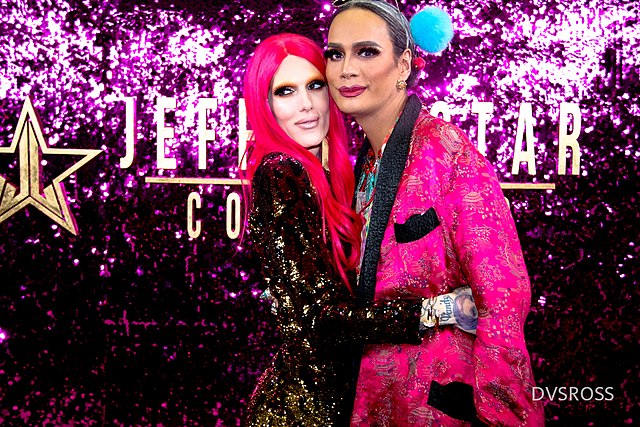 He is the creator and proprietor of Jeffree Star Cosmetics. There are rumors that the beauty mogul is in a different relationship frequently and it’s hard to keep up with the changes.

Following Star’s cosmetic empire has recently become popular. The media has become more and more interested in his personal life, and they want to know who Jeffree Star’s boyfriend is.

Searching his social media pages is not very helpful because he doesn’t like to provide all of his information continuously at once.

Star has over 13.5 million followers on Instagram, who are steadily checking in for any information or clues about what’s going on in Jeffree Star’s personal life. Here’s what we have apprehended about Jeffree Star’s current boyfriend.

Jeffree Star’s EX-boyfriend’s name is Nathan Schwandt. Star dated Nathan for five years, from 2015 to January 2020, when they lived together with a family of Pomeranians in a California mansion.

It’s been over a year since Jeffree Star tearfully declared to 33 million people on YouTube that he broke up with his boyfriend, Nathan Schwandt.

He advised that Schwandt never needed publicity and that their breakup was a family problem. He also informed his fans that one of their dogs died.

Furthermore, Jeffree Star’s ex-boyfriend Nathan Schwandt was in the limelight for two reasons: social media, and another is that he was the boyfriend of top celebrity Jeffree Star.

In March 2021 it was reported that Jeffree Star was probably dating a new guy. His name is Sean Van der Wilt.

Van der Wilt is popular as a dancer, songwriter, actor, and singer, which means he’s multi-skilled. If it’s reliable news that this is Jeffree Star’s new boyfriend, he shares something huge with Trisha Paytas.

She dated Van der Wilt in the past as well. Perez Hilton also tweeted about the possible pairing in March 2021, alleging that the two were a ‘match made in hell!’ We aren’t positive if that was meant to be a slight or a blessing.

On Feb. 28, 2021, Star posted cryptic pictures of a naked man’s figure and a picture of his red wig on top of the similar towel the man was wrapped. The caption read, “He loves when I wear red. I love when he wears nothing.”

Not long after, media celebrity and gossip writer Perez Hilton tweeted he believed the magic man was Sean van der Wilt — which, he appended, was a “match made in hell”.

Star nor Van der Wilt have verified the rumors, but most users have shown that the toned body in Star’s picture looks eerily similar to Van der Wilt. We will probably have some results soon!

Star was born male, and later on, identified as a gay male. However, he is an enthusiast of androgynous looks, and he loves transforming things by applying makeup and styling his hair in distinctive ways. In 2009, Star revealed his gender to OUT Magazine.